Have you ever been frustrated with skin that looks flat in Daz Studio? Dull and lifeless? Rubbery with a distinct likeness to that of Gumby? (Google it if you’re too young to remember Gumby.) Or maybe it just needs a little bit of pop? Most of the time, any of these issues can be attributed to SSS, or subsurface scattering, and there are a couple easy tweaks that can be made to drastically improve the look of skin in Daz.

[Visit Part 2 of the tutorial which deals with Tweaking a Chromatic Skin.]

Before we get started, I wanted to make a quick note regarding the new skin shader that was introduced with Genesis 8.1, the PBR Skin Shader (it can also be used on Genesis 8). ‘PBR’ is actually a technical term.

Physically Based Rendering, according to Wikipedia, is ‘a computer graphics approach that seeks to render images in a way that models the flow of light in the real world.’

Okay, well that was kinda vague. Both the PBR Skin Shader and the Uber Shader do this, so they are both technically PBR shaders. They use almost all of the same maps. So please don’t let Daz’s play at words lead you to believe that the Uber Shader is somehow lesser. It’s just different. While the PBR Shader has added a couple neat new tricks, it is also missing some neat tricks that will be made use of in this guide. Essentially, the PBR Skin Shader is a trade-off, and it’s up to the user to decide which they prefer. Please see the below comparison with Victoria 8.1. 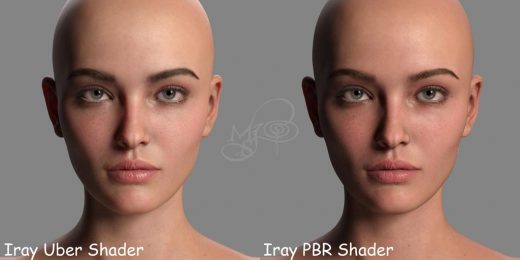 It is so very much personal preference. Personally, I stick with the Uber Shader because it allows me to better control SSS. Now, if Daz were to update the PBR Shader to bring back the SSS capabilities that the Uber Shader gave us, then it would be the best of both worlds. But for the sake of this article, I will be sticking with the Uber Shader. (Another article may come at a later date that works specifically with the new Iray PBR Skin Shader.)

One other item of note is Spectral Rendering. A lot of folks don’t know what it is and a lot of folks don’t use it. Personally, I do, and I don’t. It depends on the scene and the skin I’m working with. It is supposed to be more actuate in terms of how it bounces light around the objects in the scene, some scenes more than others. The downside is that it has a particular tendency to make skin out of the box look like muddy, green, flat…blech. The tweaks I will be going over won’t work with Spectral Rendering. Well, they will…but they require different SSS settings to not look like muddy, green, flat…blech. It also can add exponentially to your render times, even with the same exact lighting.

Is it really worth it? That’s up to you to decide. Like I said, I’ve noticed that Spectral rendering works better with some skins than others. For the purposes of this article, due to length, I will be sticking with basic rendering. If folks enjoy this article, I will do a write-up of my tweaks translated to Spectral Rendering at a later date. For comparison, here is an example with Vicky 8.1 with my Iray Uber settings.

Comparison of Iray Uber Shader with and without spectral rendering.

Okay! Ready to get started? Oh! I forgot to mention that if you want to follow along in Daz, I’m using this HDRI and no other lighting and default tone mapping. 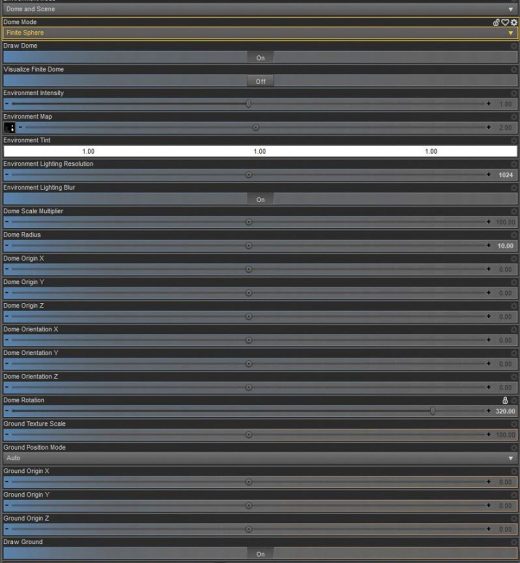 My lighting setup – Just HDRI and no other lighting or default tone mapping.

Now, what is the difference between the two? Well, I honestly couldn’t tell you, other than the fact that they behave completely differently, and that Chromatic SSS, when set up correctly, appears to behave more naturally in terms of light reflection than Monochromatic SSS. So how do you tell which is which? It’s really easy, but you’ll need to roll up your sleeves a bit and open up the surfaces tab (If you’re never looked at the surfaces tab, or are unfamiliar with it, you’ll be digging into it here!):

You will see a greyscale map slotted into the translucency color. You’ll also see a rather tomato-inspired red set for the color itself (in most cases). And if you scroll down on the surfaces panel, you’ll see the word ‘Mono’ listed under SSS Mode.

Monochromatic skin typically uses a lower translucency weight (.3 to .5) and the general rule of thumb is that it can be lightened or darkened by adjusting that slider (lower for lighter, higher for darker, etc). Monochromatic skin can be converted to Chromatic skin with some work, and that work does involve Photoshop (or another photo editing program that can use layers, such as Gimp). I will be showing you how to convert a Monochromatic skin, such as Vicky 7, over to Chromatic SSS and apply my tweaks. (I’ll try to stick with the super popular base figures that pretty much everybody has so you can follow along exactly.)

You will likely see either an exact duplicate of the base color map slotted into the translucency color, or a slightly lightened version of the base color map. The translucency color itself should (in most cases) be white (this isn’t always the case for spectral rendering, but again, this article will only cover basic rendering). And if you scroll down on the surfaces panel, you’ll see the word ‘Chromatic’ listed under SSS Mode.

Chromatic skin typically uses a much higher translucency weight (.75 or higher) and it is harder to lighten or darken simply by adjusting. This can be tweaked slightly, but if you need to lighten or darken a skin drastically, I would recommend finding a different skin that starts out where you want it in terms of tone, or go the direct route of editing the maps manually in Photoshop (advanced users). The reason for this is that Chromatic skin relies on the translucency color map, or the ‘meat map’ as I call it, to shine through from beneath the outer base color layer. If you try to lighten the skin by dropping the translucency weight, you’ll lose that ‘meat’ and the skin will end up looking flat. Chromatic skins out of the box are the easiest to tweak because they already have the necessary SSS map (though advanced users can go even further and build a new SSS map or tweak the existing one for even more detail, something I will cover in another tutorial).

Again, play around with the settings! That’s how you’ll learn what you like and dislike and what different colors and numbers do. This is where you might think about tweaking the settings for Bump, Top Coat, and/or Gloss/Specularity. They all add up to the skin’s final results! And if you’re comfortable with Photoshop, you can even build upon the SSS map we created above for more detail (blending tattoos into this layer can help immensely in making them look more realistic and less stickerific). Also note that I do not adjust eyes…you can easily slot in eyes from another character.

I know it looks like a lot of steps but it’s really not so bad, and it goes quickly once you get the hang of it!

Please see the below comparison.

The above steps can also be followed with darker monochromatic skin tones, as seen below with Monique 7 …the only thing I did different was bump the Translucency Strength up to .90 and change the SSS Reflectance Tint a smidge to give a more golden undertone rather than blue.

Visit Part 2 of the tutorial which deals with Tweaking a Chromatic Skin.