Wow! March Madness was just crazy good this year. There were a bunch of great items that I really loved and some terrific deals. We are also beginning to see a bunch of RDNA items appear in the DAZ store. In fact, some of the best deals in March were on these items, many of which had multiple stacking discounts, so they were priced at $2-$5. Hard to pass up on a deal like that!

I was actually hoping to hold back some in March, but unfortunately, that didn’t happen. Based on the March contest entries, it looks like the popular items used include –

Originally, I was going to feature these three great vendors for April. However, it looks like Goldtassel and Valandar were very recently picked, so I had to switched things up a little bit. I added in RuntimeDNA’s Daz store and DzFire, because of the fun April’s Fool joke that Daz played on us today with V8. 😀

Images with the newly released Izabella 7 will also qualify. 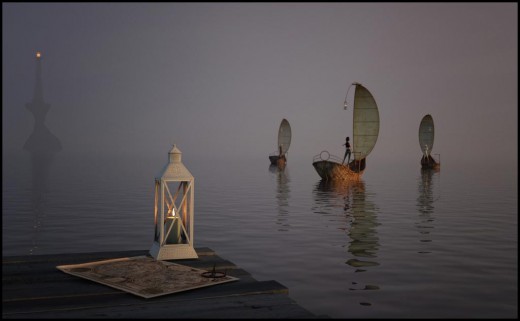 My eye is first drawn to the lantern on the pier, … there is a map! What are we looking for? A cure, some treasure, a new home? We see the ships sailing away into the haze, into an uncertain future. But there is hope, because there are always lights to illuminate our way.

A very creative use of RDNA’s Star, which together with the fantasy boats, adds a whimsical feel to the image.

All the materials look great, the water and haze are wonderful, and the accents from the warm lights are perfection. An amazing piece of art. 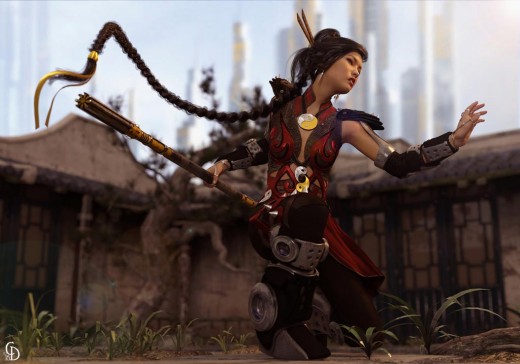 A marvelous dynamic image, blending the old with the new, fantasy with sci-fi, as well as Eastern with Western. It creates a fabulous showcase for Stonemason’s Streets Of Asia 3 and Sci-Fi Bedroom.

I especially love the movement of the character and hair, as well as her outfit, which encapsulates this blending of different elements, and yet appears as a seamless whole. Wonderful concept and marvelous use of colors and materials in its execution.

There were many great entries in April (thank you all so much for participating), so the judges had another tie for third place. 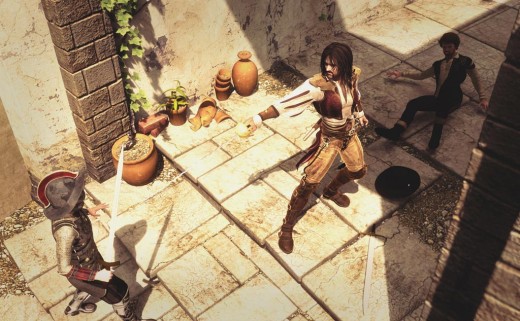 I especially love the clever use of shadows to increase the threat presented by the armored swordsman. Light bathes the current action portion of the scene, which is where our eye is drawn to first. But then, we notice the fallen man in the shadows, and realize that his brave comrade is standing ready to protect him.

Great details with the dropped sword and hat on the floor, as well as the broken crockery.

The walled in lane from Stonemason’s The Streets Of The Mediterranean helps to increase the tension of the image, and the light is superbly placed to cast shadows in exactly the right place. A brilliant example of using the environment to help capture story and mood. 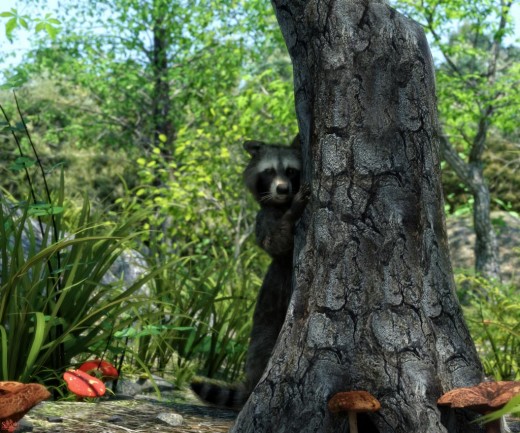 Who would not fall in love with this image! AM’s Raccoon is wonderfully emotive and adorable. The little fella is cautious, but he is also curious and perhaps looking for some adventure.

Amazing textures on the bark and everything else. I like the use of the gray bark, which helps to camouflage the hiding raccoon. However, the gray also sets the foreground elements apart from the rest of the greenery.

A terrific image from an outstanding artist. 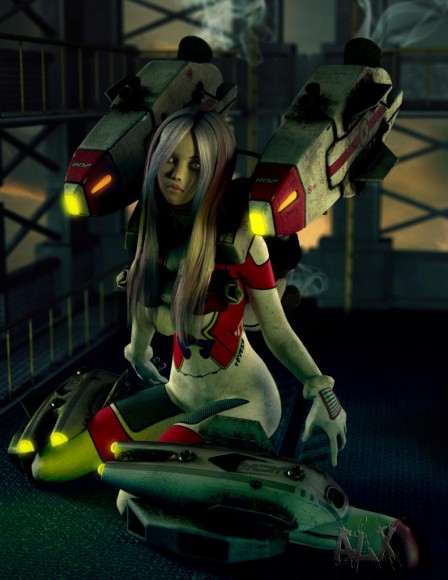 Excellent concept and great use of Stonemason’s Dirt Shaders to give her outfit a battered and battleworn look. The grave mood of the scene is further enhanced by the environment, darker lighting, expression, pose, and smoke effects.

Absolutely wonderful how everything works so well together to draw the viewer into her story.

Let there be light … by Lemeya 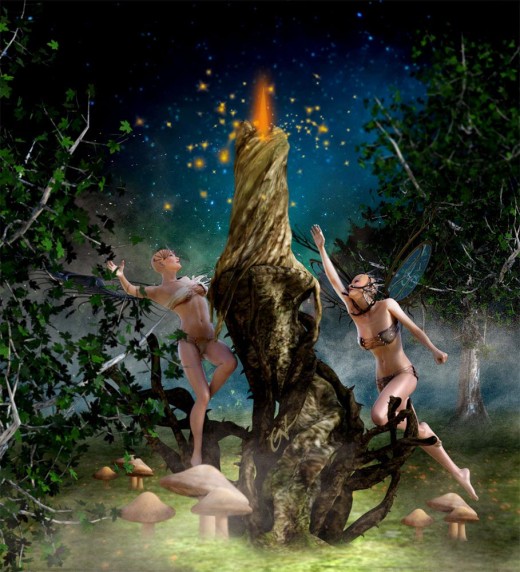 A creative and delightful composition featuring RuntimeDNA’s Lumen Tenebris front and center. It looks like both sprites are in a contest to get to the light, which makes the item even more desirable. In addition, the beautiful colors, background, and mist, make this into a clear winner!

The Evening Flight by EmotionalOutlet 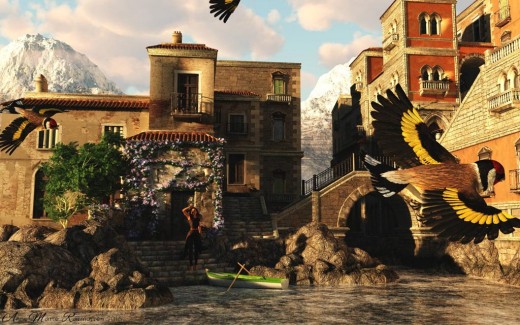 A gorgeous composition rendered in Vue.

I have always wondered about the complexity of porting Daz Studio assets into Vue, so it is great to see that the materials from Stonemason’s The Streets of Tuscany transfer so well. Beautifully put together and rendered.

Thank You and Congratulations!!

Winners, please post a comment below with a valid e-mail in the comment e-mail box. This is what I will use to send you your DAZ GC code.

Thank you all so much for sharing all your wonderful ideas and artwork with us. You are all totally fabulous! See you in our May 2016 contest!